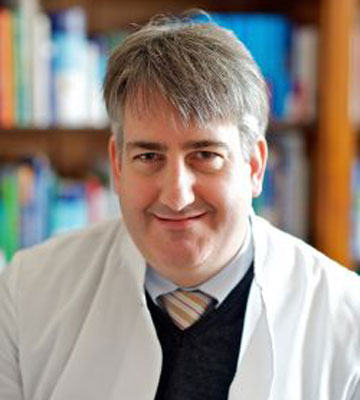 Dr. Röhnisch studied medicine at the Universities of Regensburg and Munich. Several international studies have taken him to the Beth Israel Deaconess Medical Center of Harvard Medical School in Boston (USA), the Chaim Sheba Medical Center at Tel Hashomer (Israel), the West Middlesex Hospital in Isleworth/London (UK) and the Yale New Haven Hospital of Yale University School of Medicine in New Haven (USA).

After receiving his medical license on July 2, 1996, Dr. Röhnisch worked for a total of 13 years at the Hematology and Oncology Department of the University of Munich Hospital. Between 1997 and 1999 in a joint project with the Gene Center of the University of Munich, Dr. Röhnisch was engaged in research of immunological cancer treatments, especially in the development of bacteriophage-based lymphoma vaccines. On July 29, 1999, he successfully defended his dissertation on the “Development of a lymphoma-specific idiotype vaccine to induce a specific immune response”, which later led to a patent and the foundation of a startup company.

On January 16, 2007, Dr. Röhnisch was certified as a specialist in internal medicine and since October 30 of the same year has been further certified in hematology and medical oncology. At the end of 2007, Dr. Röhnisch was appointed director of the stem cell transplantation unit and director of the immunocytological laboratory. In early 2009, Dr. Röhnisch was named chief physician at the Leonardis Clinic, a private clinic in hematology-oncology. This clinic specializes in the holistic treatment of oncology patients in the light of naturopathic therapies.

Since September 2009, Dr. Röhnisch is a partner in the Nussbaumstraße oncology practice (now IOZ Munich). He also serves patients covered by statutory health insurance at the Elisenhof oncology practice in Munich.

Dr. med. Tim Röhnisch Can Help You With:

We care for you